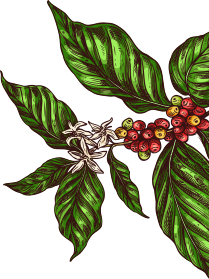 Let's go to the discovery of one of the biggest coffee producing countries: Ethiopia and its "Moka coffees"

Cradle of coffee, Ethiopia is above all known for its Arabicas with exceptional aromatic qualities. Let's take a closer look at the legend of Moka coffee, before discussing what coffee represents in the country's economy, and finally looking at the country's production areas.

A little history...
While we are not sure how coffee was discovered, Ethiopia is credited with its origin.

There is a legend of a shepherd from Abyssinia, a region of Ethiopia. In this story, the shepherd Kaldi noticed that three of his goats named Abol, Tona and Braka were very agitated after eating cherries from a coffee tree. By discovering the exciting effects of coffee, the culture of coffee and its use will then be disseminated by monks during religious ceremonies, taking advantage of the invigorating virtues to stay awake during their long services. According to the writings, this legend takes place during the 8th century. Although its discovery remains unclear, its spread will take on a global scale in the 15th century. It is distributed across the seas, by ships. The ships then depart from a port in Yemen. This port will give its name to the coffee of Ethiopian origin, the port of Mocha. Now grammatically derived from Moka coffee.

MOKA coffee in the economy
From its discovery to the present day, coffee has taken an important place in the Ethiopian economy.
Ethiopia is now the 5th largest coffee producer in the world. It is behind Brazil, Vietnam, Indonesia and Colombia.
Thanks to its 400,000 hectares dedicated to coffee cultivation, Ethiopia exports 172,000 tonnes / year (60% of its production), and is the world's 10th largest exporter of coffee.

The 4 main production regions
In southern Ethiopia, the Sidamo region offers us fruity coffees thanks to Moka Sidamo as well as Moka Yhracheffe, a fruity and floral coffee.

The Sidamo region alone accounts for 14% of the country's production. With coffees naturally dried in the sun at 1,885 meters above sea level, we find the region of Harrar in the eastern part of the country. This zone
offers us coffees with notes of undergrowth and ripe fruit thanks to Moka Harrar. It constitutes 19% of the country's production.
The Kaffa region in the southwest also offers a floral and fruity coffee with Moka Limu.
For a coffee with notes of citrus and yellow fruit, you should opt for Moka Jimma and its flavors of grapefruit and pineapple. The Kaffa region produces more than a quarter of Ethiopia's coffee with 27%.
At an altitude of more than 2,400 meters, we find the coffee trees of the Walläga region. This is where Moka Gidaamii comes from, a coffee naturally sweetened by the scarcity of oxygen in this region. The largest coffee-producing area in the country, it holds 40% of Ethiopia's production.

More than just a commercial product, coffee is therefore a cultural heritage in Ethiopia. First of all, they too are consumers of it, as these figures provided by the international coffee organization (ICO) attest: in 2015, 127,000 tonnes of coffee beans were consumed in Ethiopia. This represents a quarter of coffee sales in the Middle East and Africa region. In addition to its daily consumption, coffee is given a ceremony in its honor, the Jebena Buna.

Mother of coffee, and perpetual representative of the drink, in its production and in its cultural heritage, no one can doubt that Ethiopia is a country of coffee.